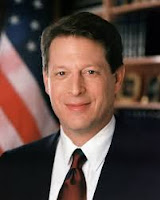 (Check out the video below.)

I used a variety of search terms, looked on Youtube, Livestream and other sites and , guess what?  No such luck.  Do you suppose organizers expressly notified those in attendance not to record the  event?  Maybe Al Gore wants no record of his words to come back to haunt him at a later date.

That said, I offer the speech below from the Dublin Conference on Hunger · Nutrition · Climate Justice that took place in Dublin Castle from 15-16 April 2013, during Ireland's Presidency of the EU. The Foundation, together with the Irish Government, hosted this Progressive event, combining key policy makers in global development with the people living on the front lines of climate change and food insecurity.

How do I spell traitor to the Constitution?  Al Gore.  To Al and other globalists, our constitution is a roadblock tho their goal of subjugating and controlling our lives.

You know he and many  scientists have lied, made up , and suppressed data to assure the advancement of man-caused climate change.

He and his buddies stand to make trillions on a cap and trade system because they, investing and overseeing the buying and selling of carbon financial unit's in a carbon exchange would rake in huge profits while redistributing our wealth.  This system would still do nothing to change any of the variables they say cause global warming.

This guy's objective is to amass as much money and power as possible.