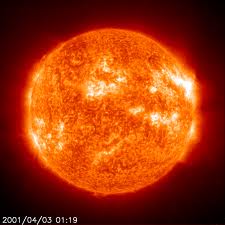 Blogger, Roz Pidcock, wrote in The Carbon Brief that any we can’t or won’t have a  mini ice-age regardless of what the sun is, or isn’t, doing because of all the C02 in our atmosphere.

That’s right folks, according to this writer and his sources, while changes in the sun’s activity can cause effects here on earth, those changes will be minimal due to greenhouse gasses and subsequent global warming.

Scientists know the sun has some impact on earth's climate. Chris Rapley, professor of climate science at University College London, told Carbon Brief recently:
"Climate science shows that the sun does have an influence on climate; this is not controversial. The planet responds to changes in the flux of energy that it intercepts from the Sun."The sun's energy fluctuates, rising and falling on an 11-year cycle.

He went on to write:

Recent research suggests the Maunder Minimum was only one factor in bringing about the LIA. In fact, it may be more closely linked to unusually intense volcanic activity and interactions between sea ice and ocean currents during the period. At a recent conference, scientists explained how a major atmospheric circulation known as the North Atlantic Oscillation (NAO) was in a negative phase at the onset of the LIA, which amplified the cooling effect of a reduction in solar irradiance and volcanic activity. This, in turn, affected the distribution of sea ice in the Arctic and disrupted a major ocean circulation that distributes heat across the globe, known as the Atlantic Meridional Overturning Circulation ( AMOC).In other words, a fall in temperature to rival the LIA would need more than a drop in solar activity.

Scientists have modelled the expected temperature drop over the 21st century due to waning solar activity - and they found that the change is likely to be dwarfed by the much bigger warming effect of greenhouse gases in the atmosphere.


CLICK HERE  to read the full text of the article. <--link

If you link on over to the article and read it in its entirety, notice the number of times the writer uses unnamed sources with phrases like, "scientists say".  If the solar minimum we are beginning to experience is going to be deeper than the in the 17th century version, thank God for global warming, eh?

Look at the sources named in the article, you'll see they are scientists wanting to advance the notion of global warming, at all costs.

Last but not least, take note of the name of the website name of which  I'm referring:  Carbon Brief.  That should tell you something about the ideology of the site's contributors.