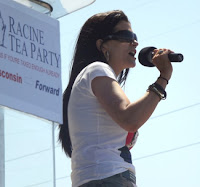 Cleveland, Ohio August 13, 2012 / — This morning, Filmmaker Andrew Marcus, Director of the upcoming documentary Hating Breitbart and Jim Hoft of Gateway Pundit announce that  conservative rock star Dana Loesch will join us along with media powerhouse Michelle Malkin at “Occupy the Truth”. This Tea Party protest will shine the light on the dishonest coverage of the media of the attempted violent bombing planned by members of Occupy Cleveland. The event will be held at Willard Park/Freestamp Plaza in Cleveland, Ohio near the site of the planned bombing on August 18th from 11 to 1 PM EDT.

This is awesome.  I wish I could be there.  I posted this because I want lots of people to show up at this event.  If you believe in liberty, and the idea that our government is 'of, by and for' the people,  then you are probably a tea party type.  Its about individual responsibility, small government, a responsible government, living within our means, and preserving liberty.  If these ideals appeal to you, you are a tea party type.  Despite what you'll hear form the other side, we are not a bunch of red neck racists.
Posted by Daniel Taverne at 10:37 PM