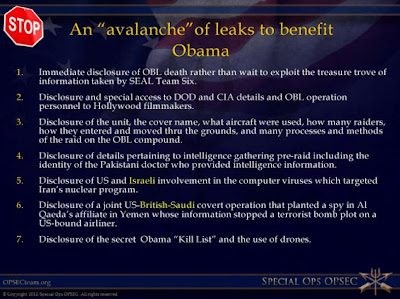 A group of former U.S. intelligence and Special Forces operatives is set to launch a media campaign, including TV ads, that scolds President Barack Obama for taking credit for the killing of Osama bin Laden and argues that high-level leaks are endangering American lives.
Leaders of the group, the Special Operations OPSEC Education Fund Inc, say it is nonpartisan and unconnected to any political party or presidential campaign. It is registered as a so-called social welfare group, which means its primary purpose is to further the common good and its political activities should be secondary.
In the past, military exploits have been turned against presidential candidates by outside groups, most famously the Swift Boat ads in 2004 that questioned Democratic nominee John Kerry’s Vietnam War service.
The OPSEC group says it is not political and aims to save American lives. Its first public salvo is a 22-minute film that includes criticism of Obama and his administration. The film, to be released on Wednesday, was seen in advance by Reuters.

“Mr. President, you did not kill Osama bin Laden, America did. The work that the American military has done killed Osama bin Laden. You did not,” Ben Smith, identified as a Navy SEAL, says in the film.

“As a citizen, it is my civic duty to tell the president to stop leaking information to the enemy,” Smith continues. “It will get Americans killed.”
An Obama campaign official said: “No one in this group is in a position to speak with any authority on these issues and on what impact these leaks might have, and it’s clear they’ve resorted to making things up for purely political reasons.”

It was recently revealed that Barack Obama canceled the operation to kill Osama bin Laden on three separate occasions, before finally approving the May 2, 2011 Navy SEAL mission.
Posted by Daniel Taverne at 6:43 AM