This is quite disturbing.  You would think our nation's educators would want to foster free-thinking, mature and responsible young adults, but some educators are, instead, tearing the most aware and lucid students down.


This is just one first hand account illustrating the indoctrination taking place in public schools today. 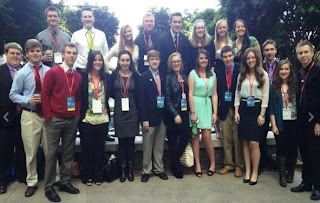 Becker is the Kid in front in the blue blazer, up front, posing with fellow conservatives.