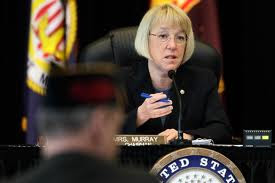 Senate Democrats, including Senate Budget Committee chairwoman Sen. Patty Murray, are hiding their budget from their Republican colleagues, Breitbart News has learned exclusively. Murray did share her budget plan with her Democratic colleagues on Tuesday.


The article by Matthew Boyle reported at least one theory explaining this lack of disclosure by Senate Democrats:

“I think it speaks volumes about Senate Democrats’ fear of the American people that they must hide their plan until they’ve first had a chance to mislead the media about it,” the Senate GOP aide said in an email. “If they had courage and confidence their plan would be popular, they would have been on the Sunday shows and holding press conferences bragging about it, as did Chairman Ryan. Instead, it’s leaks and crickets.”

You know, I just got finished arguing with a guy on Facebook.  I argued that  the left (the media) is dishonest.  The guy was pointing his finger at us, and I was pointing my finger at them.

This, however, illustrates my point.  I told the guy we should meet on the battlefield of ideas.  Dems, the left, Progressives shouldn't hide their desires.  I said, and to Senate Dems, I say, don't hide your desires.  Put it out there and let the chips fall where they may.

They know they oppose those things, yet they won't just come out and say it.  They want high taxes, they want Cloward and Piven type collapse.  Put it out there and, like I said, let the chips fall where they may.