During the, now infamous Obama prayer breakfast, Dr. Benjamin Carson stood and showed tremendous courage when he shreddd the very ideology of Obama.

Dr. Rand Paul stood and displayed his courage with a fiery, thirteen hour Senate filibuster, in which he demanded an administration answer to the question, "Can the President of the USA use a drone to kill a citizen, on U.S. soil, while sitting at a cafe' sipping coffee?"

Both men put on a display rarely seenin politics today, for whatever reason.

One thing I admire about each man is their courage.  Something else I admire of the men is that they are self-assured.  This remeinds me of the movie, "Tombstone", where wyatt Earp told his brother he shouldn't be sheriff because he wasn't a "deliberate man".

I share this quote becasue Carson and Paul are, indeed, 'deliberate' men.  I think they are statesmen of historic sigfifcance and their recent actions illustrate this point. 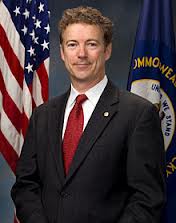 Today, Rush Limbaugh said the left fears Ben Carson because he isn't seen as having an agenda.  In so much as his general disposition, he isn't overbearing, demanding, angry, agitated, victimized by the rich, or blaming caucasions for soceital woes.  In a word, Carson doesn't sound like a Liberal.

If, as Rush says, the left fears Carson, it is because the left (particularly those in the mdia) don't actually believe their rhetoric - that conservatives are racists, sexists, bigots, homophobes etc- so they fear him because they know (to conservatives)  the importance is placed on what Carson believes and says (his character) that matters,  not the color of his skin.

The answer would be a complicated one; one I am not qualified to answer.

I detected a strong Christian faith ad resolve in Dr. Carson, and in Dr. Paul I detected a stron sense of constitutional respect.  I love both.  I think they would compliment each other in a way that Obama/Biden could never do.

I say this because neihr Bien nor Obama seem to be particularly vested in religion or the constitution.  Theyactually seem to be hostil to it assaulting the each amendment several times.

So, to the powers that be:  If you want to save the country, consider Carson/Paul 2016.  This is a ticket America would love.

(Typo fixing to follow)
Posted by Daniel Taverne at 12:51 PM