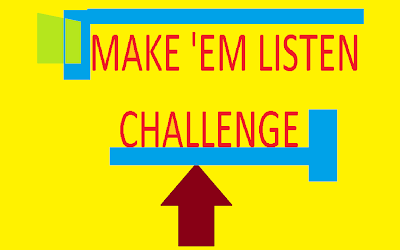 This is a challenge I am making.  I am not an agent, or a representative, of Rush Limbaugh.

I am simply a inspired  listener with a desire  to get the words of Rush Limbaugh heard by more people; people  who might not normally have the inclination or time  to tune in to his radio program themselves.

Today, while listening to Rush  responding to a dumb-ass-commie-Congressman who believes it's fair that Phil Mickleson (and rich  folks like him) only get to keep  37 cents of every dollar he makes, I felt compelled to issue this challenge.

For the next 3 weeks and longer if you wish, I challenge all of you conservative business owners to find and play the Rush Limbaugh Program in your places of business, if you don't do this already.

Instead of relaxing music, you Dentists, tune the office station to Rush Limbaugh.  Walmart, tune to Rush.  All you grocery stores, department stores, clinics, shops, turn to Rush Limbaugh instead of the usual stuff.

The left has the media.  Journalism is dead in the mainstream universe. Now we need you!  We have to propagate the truth by making others listen.

Are you a construction worker?  Put your job site radio on Rush Limbaugh.  If anyone tries changing the station,  stand firm on wanting to hear what he says.  We need to be bold.

If you own a multi-floor corporate building, put Rush Limbaugh on in the elevators.

Whatever walk of life you are in, make others listen to Rush Limbaugh.  When you are in your car  blasting your bump-bump music, if you are conservative, consider blasting Rush Limbaugh instead.

I issue this challenge to fight the left.  There must be a reason why the Huffington Post would name Rush as the 10th  worst person in the world.  That reason, I think, is because he's right, and he's a threat to the Left's plans to ruin America.

I think he should be number one.  Lets see if we can move him up in the rankings.

This is why I want so many more people to hear his words.  We've got to reach the uninformed voters.

Will this do it?  One can only hope.

Lets do it America.  Lets stand up and say no to the left by broadcasting Rush Limbaugh at every conceivable opportunity.