Photo is me in front of the Duck Dynasty tractor trailer 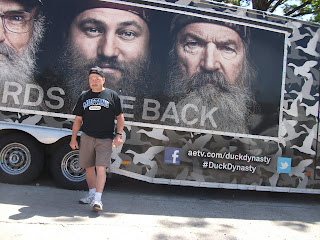 CLICK HERE - to go to Rush Limbaugh's page to read the entire transcript on this topic.

RUSH:  It's about a family that have become multimillionaires in the duck-calling business.  These guys make the -- quack, quack -- things that hunters use to call ducks.  They're the Stradivarius of duck calls, and they have made multiple millions, and there's a reality TV show about these people, and it's called Duck Dynasty.  I was reading about it. I haven't seen an episode yet.  Well, I take it back.  I did watch 10 minutes of an episode this morning 'cause I read a story about how it is cleaning up in the ratings.  It's wiping everything out, Duck Dynasty.  And the episode I watched, folks, I'm sorry -- he-he-he-he -- I don't know.  I've gotta take a break.  I don't have enough time to go into it now, but I will.  I am not ducking it.

RUSH:    Duck Dynasty.  If you know Duck Dynasty, you know America.  Duck Dynasty is cable's top-rated reality series this year.  It beat the finale of American Idol, and it is the number two original series overall behind The Walking Dead.  Now, I can't tell the difference.  Only kidding.


RUSH:   Just to wrap up this Duck Dynasty business, Duck Dynasty, the highest rated show on TV Wednesday night, all TV.  Highest rated.  Not just cable.  Its numbers were bigger than Survivor on CBS, bigger than American Idol on Fox, and the numbers weren't even close.  Duck Dynasty.  If you haven't seen it, when you do watch it -- I downloaded about eight episodes. I'm flying out of town today and I may watch some on the airplane.  Well, hey, this is a big show.  I gotta get in on it.  I watched 10 minutes of an episode today where one of the stars is teaching his daughter to parallel park in what looks like the town dump, and they're using garbage cans as the parking space.

There's six or seven guys on a concrete restraining wall watching, chewing and spitting tobacco, making jokes about her inability to parallel park and making jokes about the father, who is the star of the show, trying to teach her.  You watch this and you won't know whether its ratings are high because people relate to it or they're laughing at it.  You won't know.  It's on the A&E network, Arts & Entertainment.  Now, The Walking Dead is on AMC.  You know, A&E, Arts & Entertainment, was supposed to be like a PBS, very, very highbrow.

The father, just so you know, for those of you who are gonna take time and watch this show, Duck Dynasty, the father of the Duck Dynasty family, they're multimillionaires.  Let me tell you something.  I have watched episodes of the Real Housewives, and that's just as, if not more so.  Mr. Snerdley, it's show prep, yes.  I've not watched whole seasons.  I get scared watching this stuff.  I mean, you watch The Real Housewives of Orange County, New York, and you find out that there are people who do not know anything about what's going on in this country, and they don't care.

Rush is sorely mistaken to lump Duck Dynasty in with the likes of Real Housewives.  Let me explain.

First of all, with Duck Dynasty, you'll never hear any bleeping out of cuss words because these folks are respectable Christians who don't talk like that. 2.  At the end of each episode, the family is seated around the dinner table where the Father, Phil, says a meal blessing. 3.  The voice of Willie is heard giving a life-lesson, related to the show's content.  4.  At the end of Last season, Phil told the A&E producers, whom in the first season edited out his "In Jesus name" part of the dinner  blessings, that he would not renew their A&E  contract unless this 'anti-Jesus' editing stopped.

I live in West Monroe, Louisiana where this show is filmed, and I have it on good authority that my report here is accurate.

When Rush described the guys as sitting on a retaining wall "spitting tobacco", that is not true.  They don't do that.  This is a very good, upright family who lives principals of liberty.  They do romanticize things somewhat, but Rush should really watch entire episodes before rendering his opinion.

This is one of those rare occasion when EL-Rushbo is a low-information pundit.

Watch and Listen to Phil, the Patriarch, explaining something.  Listen all the way  to the end of this video where he explains cultural decay.

Posted by Daniel Taverne at 4:36 PM