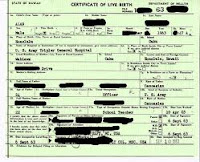 .
It's "A QUESTION OF ELIGIBLITY"

This is the second of three articles explaining the criminal complaint that scanner-expert Doug Vogt filed last week with the FBI.

The 22-page criminal complaint filed with the FBI by document-imaging expert Doug Vogt charges that individuals within the Hawaii Department of Health, Obama political operatives and an unidentified graphic artist worked in a multi-state conspiracy to create a fraudulent long-form birth certificate for Barack Obama.
Vogt's complaint asserts: "I have irrefutably proven that the Certificate of Live Birth that President Obama presented to the world on April 27, 2011 is a fraudulently created document put together using the Adobe Photoshop or Illustrator programs."

Please read the article I have linked to in this post.

Since the lodged complain is a valid one, I have just one question: Where to hell is mainstream media?
Where is ABC, NBC, CBS, CNN, the New York Times… even Fox News? I know the media is going to keep this story squashed, so it’s up to us everyday Americans to disseminate this k the news that mainstream will not.


I believe the current administration is perpetrating a fraud. Wouldn’t this explain why it took so long for Obama to come up with a long –form birth-certificate? Think about it.


Do you think Weiner is the only Politician capable of looking you right in the eye while telling a bald-faced lie?
Posted by Daniel Taverne at 10:31 AM